My grandpa, Oyvind Leiv Rydland, worked as a design engineer for the Michigan State Highway Department in the 1930’s. He was involved in the design of bridges for the state.

While I don’t recall grandpa talking about his work or these bridges, my dad would occasionally mention them to me and tell me that if I went to Michigan I should see these bridges. A long time ago I had seen one of the bridges that grandpa designed, the Cut River Bridge in the Upper Peninsula of Michigan, but not the other. On this trip to Michigan I found out where the other bridge was located.

So on 11/12/17 I headed up from Grand Rapids to Cadillac, then west on M-55 over to see the bridge spanning the Pine River. The interesting thing I found there was that although this may not be a real impressive bridge by modern standards, it was at the time.  They even built a park next to it as a tourist stop. They had a fairly large parking area near the bridge and a path for visitors to get a closer view of the bridge near the river. I guess at the time, it must have been a pretty impressive structure. Perhaps it was impressive because most bridges in Michigan do not have to span deep valleys and this is one of the exceptions.

All in all, it was kind of cool to see something my grandpa had a hand in building.

From one of the websites: “The Mortimer E. Cooley Bridge is one of only two cantilevered deck truss bridges in Michigan. This structure is notable on aesthetic grounds as well, as the winner of the American Institute of Steel Construction Award in 1936 for the most beautiful structure in its class. This is also a large bridge, with an overall length of 555 feet.” 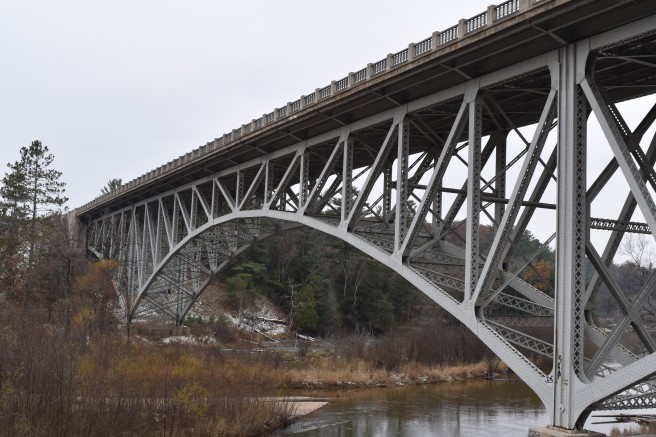